After reading an article from Editor, here at techestigate, about programming for kids and inspiring comment from our reader Ann, “How to get them interested in learning”, I started to think about such a way to start.

A lot has changed from late 80`s when I was a teenager. It is hard to explain to my kids how was life back then without mobile/smart phones, tablets, laptops, smart wear etc. My exposure to electronics started with ZX Spectrum and Commodore 64. Later it was HP 28s scientific calculator that got me interested in programming and computer science.

Back in 80`s BBC (British Broadcasting Corporation) made BBC Microcomputer System, or BBC Micro, a series of microcomputers and associated peripherals designed and built by the Acorn Computer company for BBC Computer Literacy Project. BBC Micro was designed with an emphasis on education. It was notable for its ruggedness, expandability, and the quality of its operating system. The BBC Micro system was adopted by most schools in the United Kingdom. It was also moderately successful as a home computer in the UK despite its high cost. As a side note, Acorn also employed the machine to simulate and develop the ARM architecture which, many years later, has become hugely successful for embedded systems, including tablets, cellphones and microcontrollers. In 2013 ARM was the most widely used 32-bit instruction set architecture.

At the dawn of second millennium new academic discipline called STEM (short for Science, technology, engineering and mathematics) arose. The term is typically used when addressing education policy and curriculum choices in schools to improve competitiveness in science and technology development in an interdisciplinary and applied approach. Rather than teach the four disciplines as separate and discrete subjects, STEM integrates them into a cohesive learning paradigm based on real-world applications. What separates STEM from the traditional science and math education is the blended learning environment and showing students how the scientific method can be applied to everyday life. It teaches students computational thinking and focuses on the real world applications of problem solving. STEM education begins while students are very young, as early as grade 3 (age 9+).

Idea is very simple make use of programming as learning tool, learn to program then program to learn. Science, technology, engineering, and math these are all areas of learning that our kids need to be comfortable with to excel in the future. STEM makes creators, thinkers, problem solvers, doers, innovators, and inventors. Exposing kids to simple STEM ideas at an early age today sets a foundation for higher learning tomorrow.

So far, we were going over “how to motivate” part of our question. Let me talk a bit about micro bit itself. 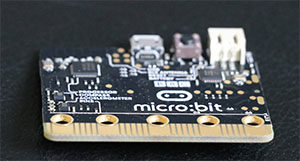 Again after 30 years, the BBC turn to good old idea, just this time they are calling it BBC Micro Bit. Planning for this project began in 2012 as part of the BBC Computer Literacy Programme and by the time of the launch in July 2015 the BBC had taken on board 29 partners to help with the manufacturing, design, and distribution of the device. The BBC has said that the majority of the development costs were borne by the project partners, and it intends to license the technology as open source and allow it to be manufactured around the world for use in education, and it has formed a non-profit company to oversee this.

The Micro Bit was designed to encourage children to get actively involved in writing software for computers and building new things, rather than being consumers of media. The BBC planned to give away the computer free to every year 7 (11- and 12-year old) child in Britain starting from October 2015 (around 1 million devices). In advance of the roll-out an online simulator was made available to help educators prepare, and some teachers were to receive the device in September 2015. 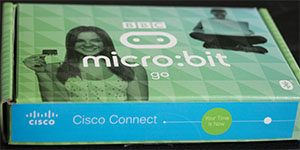 Thanks to Cisco conference (and my coworker that has attended it and donated a micro bit) held locally I was able to get Micro Bit. Cisco is one of project supporter along with Microsoft, ARM Holdings, Samsung, Python Software Foundation, Lancaster University and many other.

The board’s graphical design is intended to appeal to children and vaguely has the shape of a face (are the push buttons its eyes or the Micro bit logo?) with different silkscreen hairdos of several colors. The board was also designed with safety in mind, which is why it is powered from an external battery pack (two AAA 1.5 V cells) instead of from an on-board button cell as was the case for earlier designs. Power can also be applied through the USB connector.

What can be done with it? 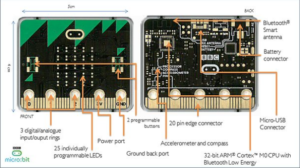 Besides scrolling text messages and producing other visual effects on the LED matrix the micro bit can be used for many other applications. Because of its battery pack and Bluetooth LE connection the board is an excellent candidate for the Internet of Things (IoT), and wearable and mobile applications. Its on-board sensors allow for orientation and movement detection making it suitable for games and game controllers or remote controls for other devices. The board can also be used as the brains of an application, like a robot or cart, by using the extension connector.

The edge extension connector breaks out 19 GPIO pins of the main MCU (plus power supply), giving access to the pushbuttons, six analogue inputs, a SPI bus and the I²C bus that is also connected to the accelerometer and magnetometer. Furthermore, five pins have been designed as large holes to accept banana plugs and crocodile clips for quick and easy connections to breadboards and other hardware.

How to program it? 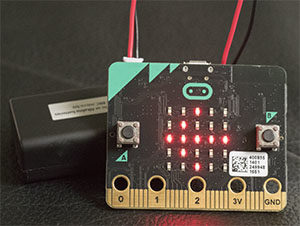 Since the ultimate goal of the BBC is to get children to create software, the micro bit is supported by a suite of online programming tools targeted at novices. Currently four different languages are available: Block Editor and TouchDevelop, both from Microsoft, a visual JavaScript editor from Code Kingdom and MicroPython. The more advanced user can also program the board directly in C/C++ from the ARM mbed development environment.

Projects are available for all of the languages and editors, starting with Block Editor, the simplest, and moving up to MicroPython, which gives you the most versatile interface and the widest range of transferrable programming skills. There’s also a micro bit Android app, although the process of pairing it via Bluetooth is a little frustrating, thanks to some awkward button-pushing gymnastics, six-digit pairing codes and an infuriatingly short window in which to enter them in the app. Rather than having its own coding interface, the app sends you to the website where you can use editing tools you’re already familiar with.

For its size, the micro bit is an incredible educational tool that will let teachers, parents and students have fun with code to create games, wearable tech and other devices as yet to be imagined. Its small size and built-in sensors make it quick to code and entertaining to use, but it’s really designed for education and is a springboard to bigger more complex platforms rather than a rival to the likes of Arduino and Raspberry Pi.